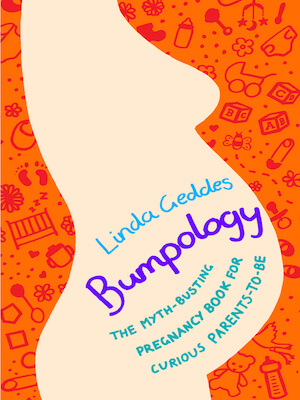 Don’t be fooled by the “ology” in the title. This book has its roots grounded in facts, but it is certainly not overly scientific or scholarly. By writing Bumpology, Linda Geddes herself says that she was seeking to help pregnant women and their partners make up their own minds about the plethora of information that is thrust in front of expectant mums.

Geddes has a point, and perhaps what is most worrying for women is that the “official” medical advice changes so often and so quickly, that trying to do the best for your unborn child can feel as though you are preparing for an exam whose syllabus is always changing. One moment a certain food is highly recommended, and the next it is on the “banned” list.

Linda Geddes and her husband are both science journalists, so they are used to weighing up whether research has any merit and presenting it in readable language to the public. The main purpose of this book, claims Geddes, is to equip women with enough information to make up their own minds about how risky an activity is.

Geddes has organised the book into chapters based around three sections: bump, birth, and babies. So the book can be read in its logical progression, but it can also be dipped into, as the text itself is arranged in a question and answer style. The fact that the (albeit sizeable) minority of the book is about bumps might surprise some readers, but the truth is that the available research seems to be on birth and newborns rather than on pregnancy, so these other subjects deserve their fair share of the focus.

It is this question and answer pattern that differentiates Geddes’ book from the others on the market, and makes it so easy to navigate. It also gives the book a chatty, conversational style, which makes the text easy to read.

After posing a question such as “Does pregnancy make women forgetful?” Linda Geddes explores the concerns that women might have about the topic. She then examines the evidence that is available, and comes to a conclusion (which is usually reassuring to the reader). Essentially, the book provides common sense answers which are rooted in some science!

Sometimes, you might wish for a bit more firm guidance. For example, her assertion that the research on the effect of slight drinking during pregnancy is inconclusive does leave the reader a little unsatisfied. Does that mean that you can have a glass of wine per week or not? However, if the research is inconclusive, Geddes does not have a particular drum to bang on anything. As a reader, she assumes that you are intelligent enough to weigh up the evidence and make up your own mind.

Overall, Bumpology is a fascinating read, which provides a logical explanation of most pregnancy and new baby questions.